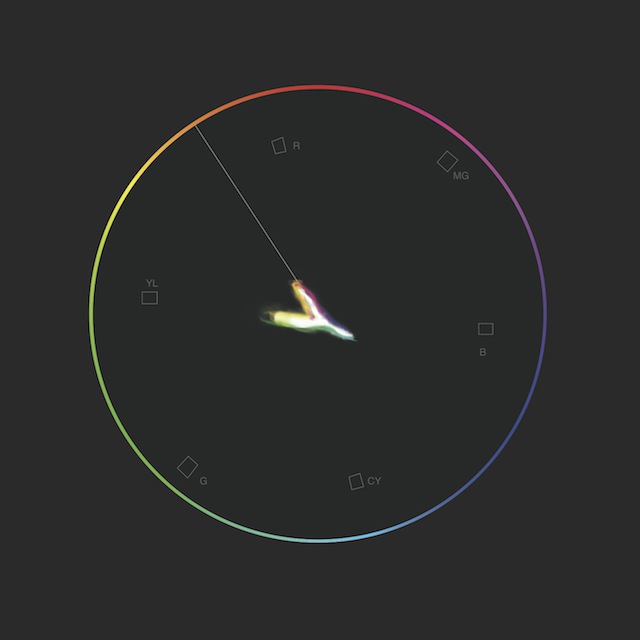 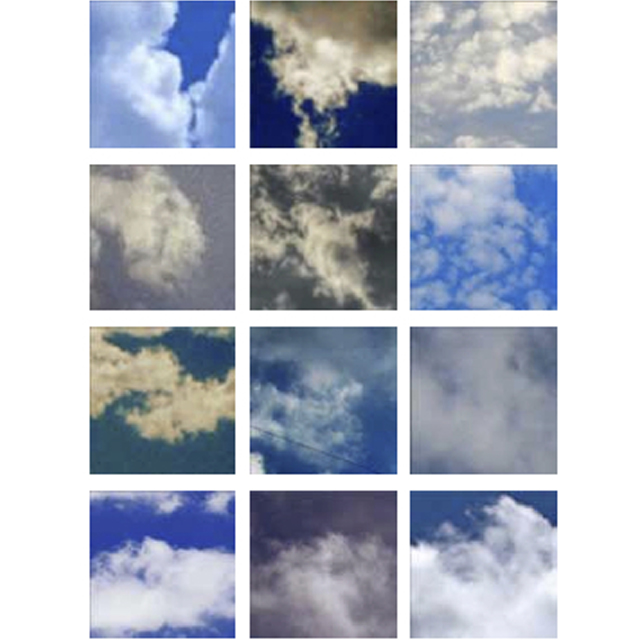 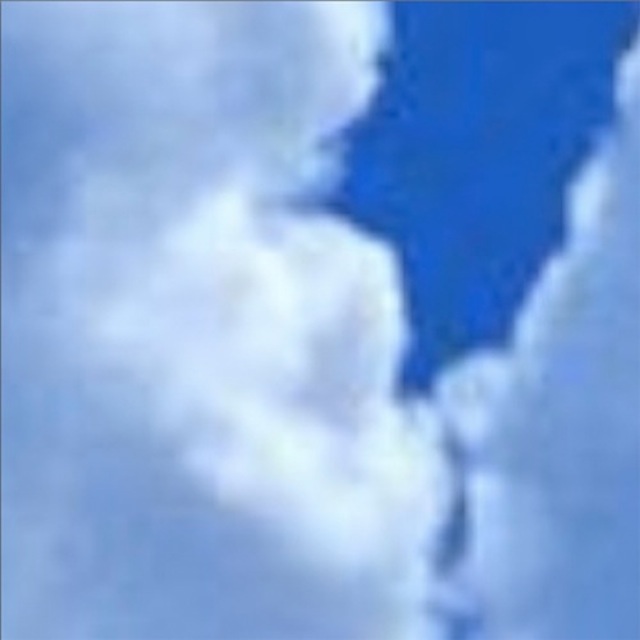 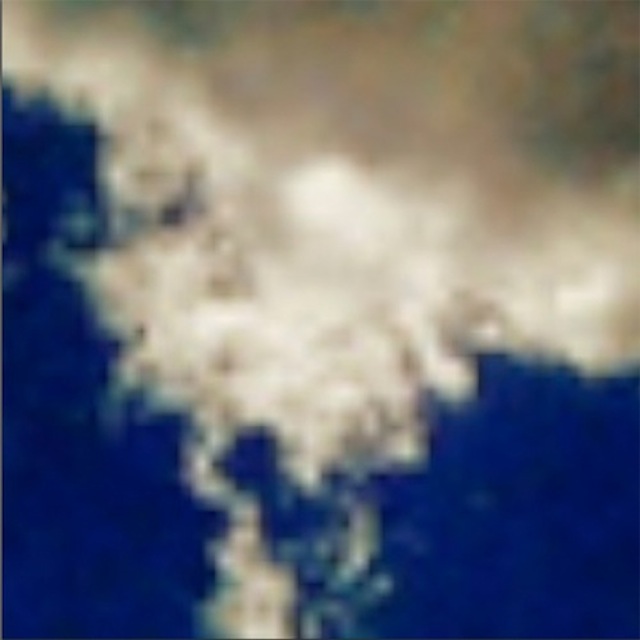 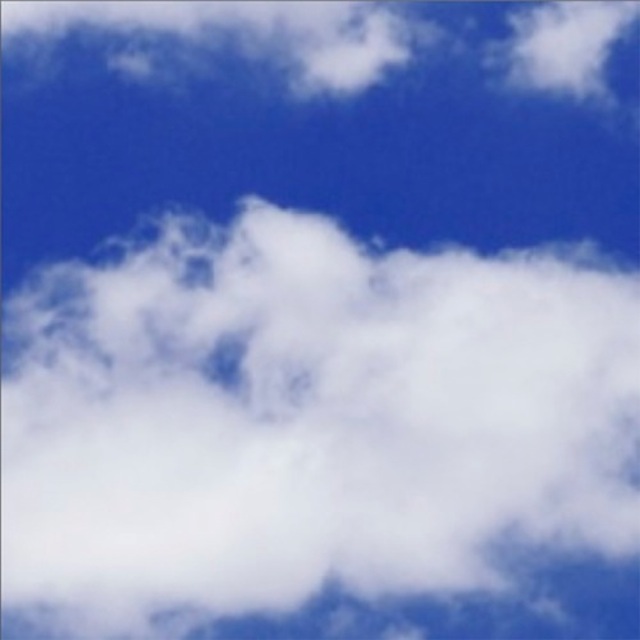 On 18, Jun 2010 | In Installation Photography | By diegocaglioni

Faces in The Sky

Look to the clouds trying to image faces is a carefree game that everyone does. In Faces in the Sky the artificial intelligence of a computer try to do the same action through an algorithm made for search human faces inside photos. I submitted to the informatic eye thousands pictures of skies from all over the world, some taken by myself, others found in Internet or given by friends but only few little pieces saved themselves from the multitude.
While we looking to the chosen clouds sometimes the hidden face is clear, other times doubt is legitimate: is the machine wrong or we have not enough imagination? 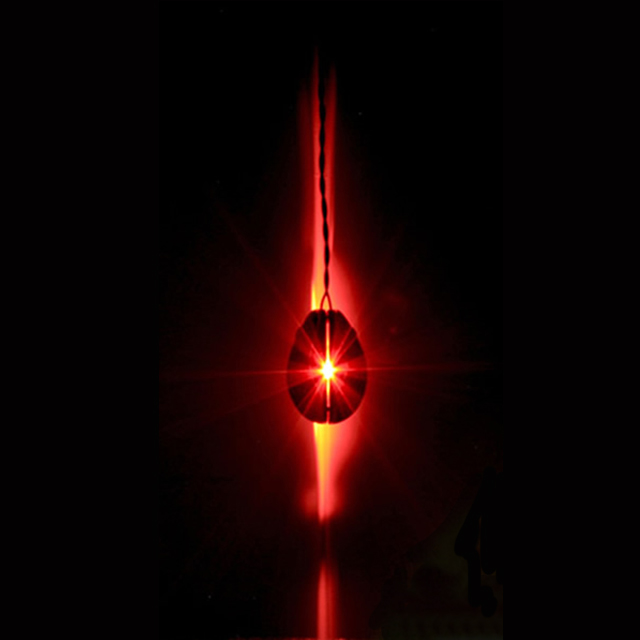 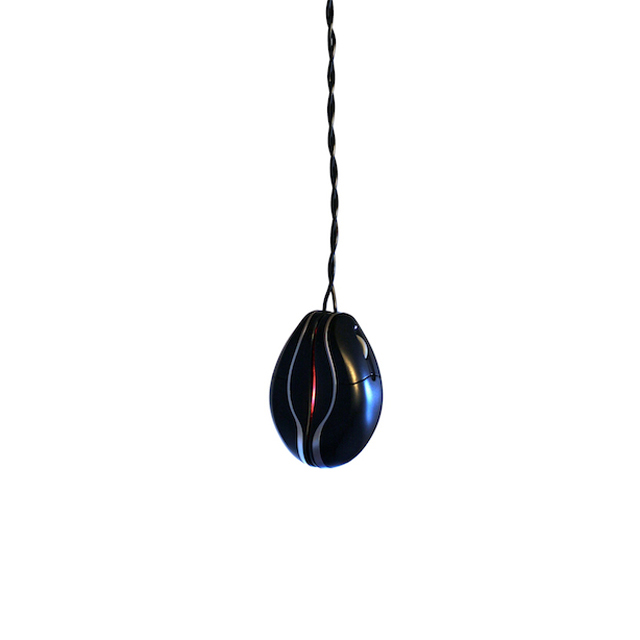 One computer mouse is attached to another face to face and both hang from the ceiling, suspended on their own cables. This describes the “raw” material of this installation, where light is simply the red glow emitted by the optical sensor on each mouse. The artist uses several components hanging at different heights, but all within reach of the user who is invited to join hands around this totally contemporary and technology version of the votive lamp. 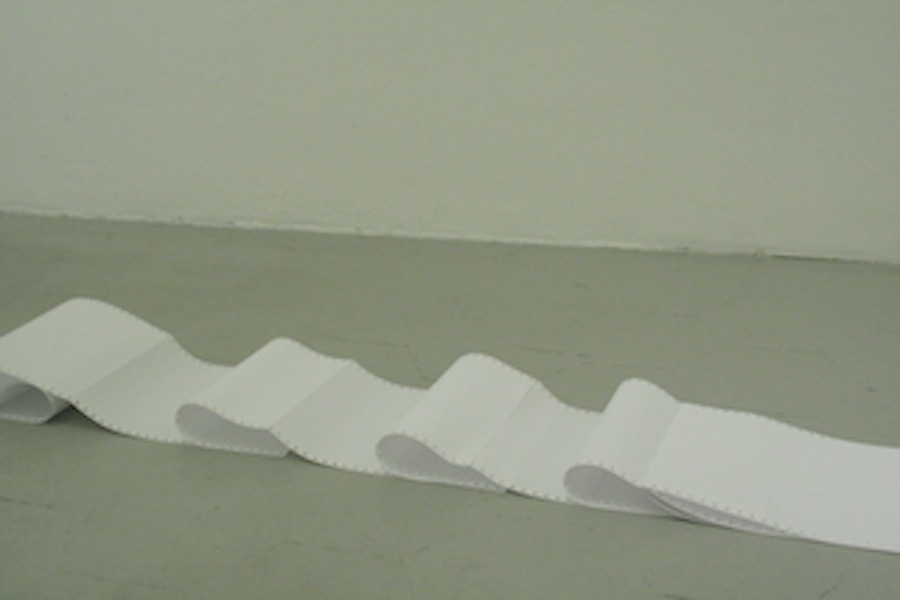 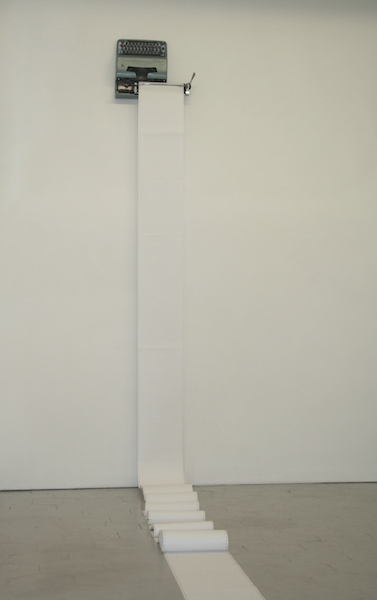 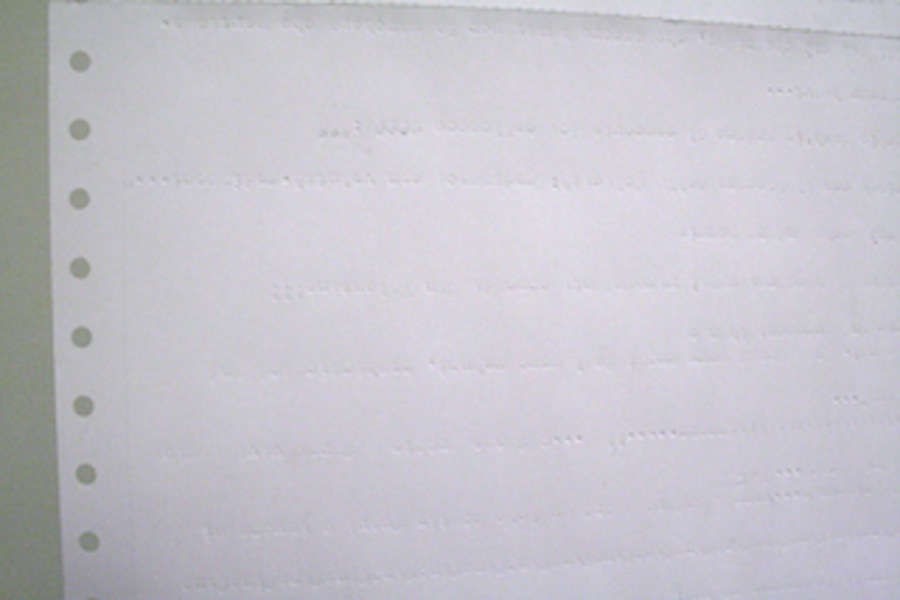 Typed sentences has been collected by people I met and I’m actually meeting in chat for two years. These sentences are not picked up from conversations but they’re written thoughts near the avatars, substantially they have the same function, they’re simply the “written” version of the images. They include quotes, moods, messages, vents… Usually a person writes them to show everyone in his chat list what important happened to him or what he’s thinking about, so they are like a synthesis of mood or what happened in that moment of his life. Through these thoughts we can follow either inner events without a significant for us or common events (the earthquake, New Year’s Day, Berlusconi chairman of the Board, Obama’s election, etc…).

I’ve typed all these sentences chronologically, without ink, to impress them on a material support and to save them from a certain disappearing.
Lack of ink does the person who will read these sentences to stay in the right point of view and nearer, with more attention and make them more intimate than clear types, easy to read by many in the same time, like it would be happened in a digital medium they were born.

Explosions in The Sky

The video is a game between pressures: the atmospheric pressure, the artificial pressure and the digital com-pressure; the result are fragments, material, picture and sound units. The bottom and the top seems fighting but, in reality, this is their material exchange.
Here is that DiVx (then the jpg) and the mp3 are metaphors of sublimation, not anymore waste of information, characteristic of “low” definition, but addictive transformation itself. 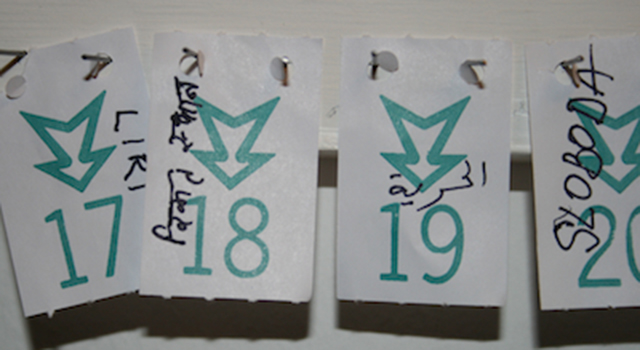 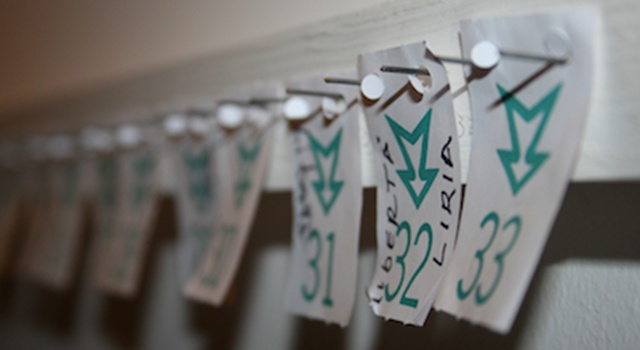 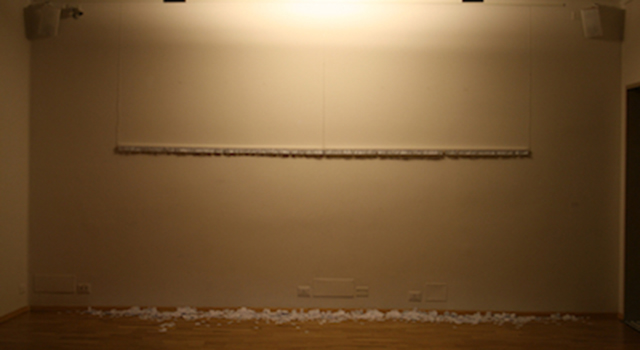 The queue of people moves slowly early in the morning to a front office, to obtain a document, a permission… a hope to live in dignified way in an other Country.
My project doesn’t pretend to change the immigrants situation in the city of Bergamo, it’s only a small tentative to restore a service:
Like all public places with great flow, the Immigration Office has a “No queue system” that, unfortunately, it doesn’t work for ages.

Elementi is a video which its abstraction could made us think that it is completely made by a computer. To the contrary, all we see and we hear has been taken from reality: the central part is a shot of festival colour banners, during a windy day; instead black and white parts are train cables shot on travelling. From these films I took the minimum, the more elementary parts of themselves. I worked with the sound in the same way: noises of colour banners were accentuated in high frequencies; train noises in low frequencies (spread with a 50 W amplifier). The installation is a flow of real elements that, recombined, produce new energy. 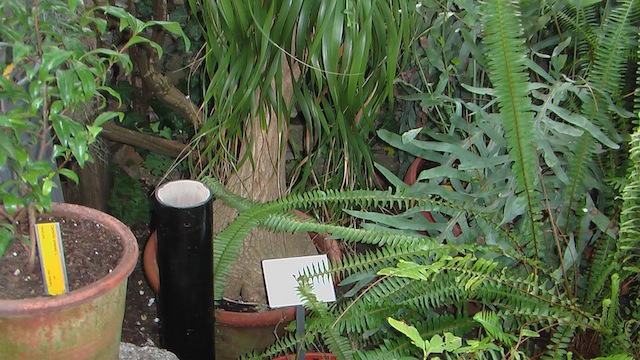 In a botanic garden I made a sound installation where an artificial voice pronounce all the 155.941 chloroplast nitrogen bases of Tobacco plant. Nitrogen bases makes the DNA of every living being, they are like letters that compose the words of a discussion, with the changing of their place changes also their meaning. In this way I made the plant speaking which described itself, literally…

On 20, Jun 2007 | In Installation Performance Sound | By diegocaglioni

Playing Alphabet is an interactive installation composed of two computer keyboards. All alphabet letters are used to be heard in the same time, all of them are pronounced by male and female artificial voices. The two users can keep quiet or listen to the letter which they want pushing a button; female voice will be activated using small, and male using uppercase letters. The work was born as a sound game with letters, it could be played trying to pay attention to the other letters heard playing, but it’s also a battle between man and woman and for whom keep quiet the other. 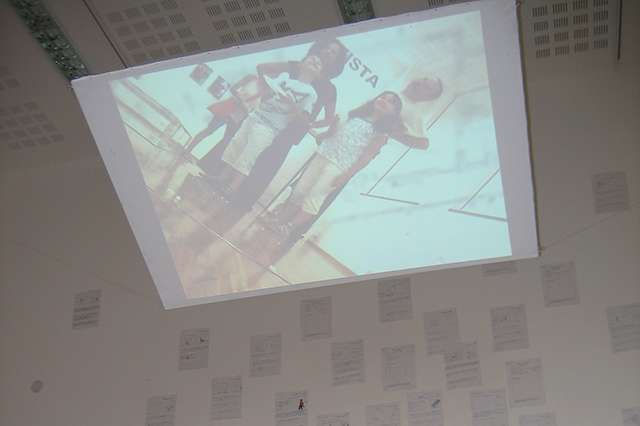 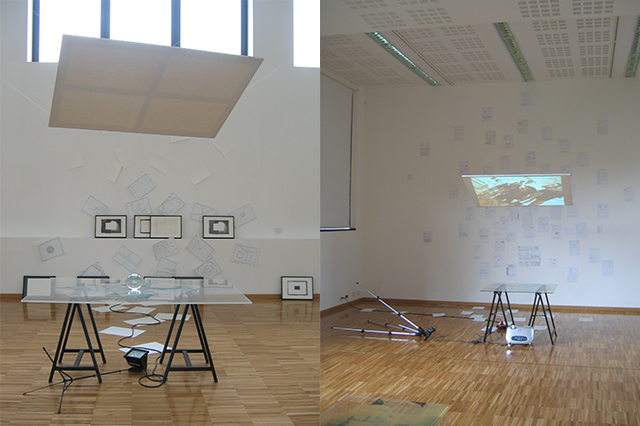 In Programma is an installation about the artist-curator figure. Especially it’s grow to look at a show in a larger point of view, trying to see itself like a wide work.During the vernissage I recorded the event, the centre of the work is who is looking at. Next day, with less confluence, I projected the registration (with sound). The canvas almost become a window of another show, a different time dimension so similar to the past moment, a pending place (in all senses) where people are like past phantoms, the place is the canvas that comes to be again a medium of a “different” reality. The clear reference to the Giulio Paolini’s installation (Fuori Programma, in the next room), is because some factors: The clear language he used perfectly suits to the figure of the student (staying in didactic area, if we want) or, better, to another artists generation. Solving that “isolation state” in what was Paolini’s work, too much “out”, and not have a dialog, like in my opinion should have, with the didactic place.